Juvenile rat snakes are gray with brown blotches and look very much like fox snakes. As they age, they become darker in color. Adults are black with white lips, chin, and throat.

Eastern rat snakes mate as early as the end of April, and the breeding season continues into late May or early June. In late June or July, the female buries 12 to 20 eggs under a rotten log, decaying leaf litter, or a rock. The leathery-shelled eggs are white, oblong and about 1.4-2.4 inches (3.5-6.1 centimeters) long. The eggs hatch in approximately 9 to 10 weeks. The young snakes require no parental care.

The eastern rat snake is a terrestrial snake species that can be found in many different habitats, including hardwood forests and woodlands, wooded canyons, swamps, rocky timbered uplands, wooded areas of streams and rivers, farmland near woods, old fields, barnyards, and rural buildings in wooded areas. This species is often found in environments where wooded and open habitats are intermixed. It often climbs trees, especially rough-barked species or those with vines. It may occasionally be seen in the water. Eastern rat snakes hibernate in deep crevices or underground.

Eastern rat snakes can live up to 20 years.

Eastern rat snakes benefit people by controlling populations of mice and rats. Rat snakes are also popular as pets due to their calm demeanor. 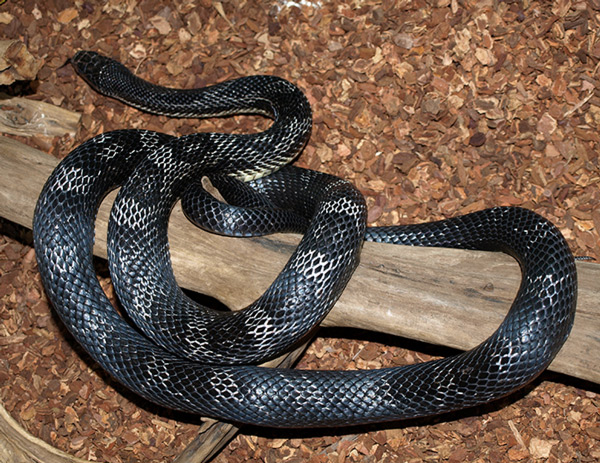