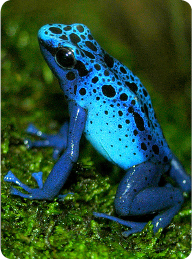 The Blue Poison Dart Frog is a small frog with bright blue coloring.  Its back and top of the head are a lighter-colored sky blue, while its belly and legs are a darker blue color.  Dark blue and black spots cover the frog’s body, primarily its back and head.  The sexes are similar in appearance, with females being slightly larger than males.

In the wild, Blue Poison Dart Frogs eat primarily insects, including caterpillars, ants, beetles, flies and mites.  They will also consume spiders and other arthropods.  At Cosley Zoo, these frogs are fed fruit flies and crickets.

Blue Poison Dart Frogs breed in February and March.  The female lays 5-10 eggs at a time.  The eggs are laid in moist areas, but are not completely submerged in the water.  Tadpoles hatch 14-18 days after the eggs are laid.  It takes tadpoles 10-12 weeks to undergo metamorphosis and become adult frogs.

In the wild, Blue Poison Dart Frogs are found in Surinam, South America.  They inhabit a few isolated areas of rainforest, choosing areas that are warm and humid, near a water source such as a stream.  While they are able to climb trees, Poison Dart Frogs are typically found on the ground.  These frogs are diurnal (active during the day).

In the wild, Blue Poison Dart Frogs live for 4-6 years. In captivity, they can survive up to 12 years.

The toxins in the skin of a Poison Dart Frog can be poisonous and even fatal to humans. However, these toxins may also be beneficial to humans, and scientists are researching them to see if they can be used in pharmaceuticals.  Poison Dart Frogs have also become popular as pets.  Only captive-bred frogs should be purchased as pets to preserve the wild population, which is threatened due to habitat destruction and illegal collection for the pet trade.  Zoos around the world are working on conservation projects to protect the wild population of these frogs, which play an important role in the ecosystem as a predator of insects and other invertebrates.